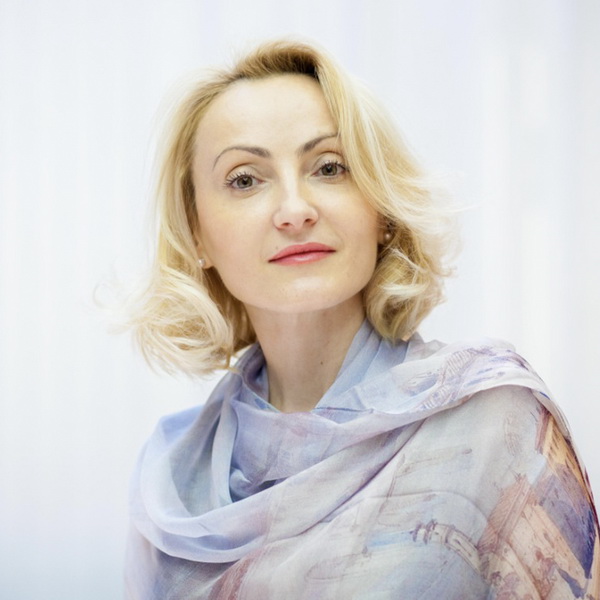 1991-1996 – graduated The State University of Medicine and Pharmacology named after Nicolae Testimiteanu (Republic of Moldova).

1998-1999 - residency in obstetrics and gynecology at the Research Institute for Maternal and Child Health.

2000-2004 - postgraduate studies in obstetrics and gynaecology at the Institute for Maternal and Child Health.

2000 - 2005 - certification courses and advanced training on the introduction of high performance technologies in obstetrics and gynecology and in the management of healthcare institutions (Europe and USA).

2005 - received the PhD degree from the Institute for Maternal and Child Health.

2007 - advanced training in ultrasound diagnostics and perinatal diagnostics in the first trimester of pregnancy (London, England).

2010 - received Russia's highest public award for excellence in healthcare, the Order of the Hippocrates.

2010 - development and research of the Luxeface & Luxebody thread rejuvenation method.

2011 – received the State diploma in plastic surgery in the Russian Federation.

Since 2011 - president of the Russian Association of Interdisciplinary Anti-Aging Medicine (RUSIAM).

Since 2013 - scientific director of A Swiss Group (Switzerland).

2015 - was awarded the title of "Best Doctor" by the Committee for the Support of Presidential Health Programs and the Medal for Merit in Medicine.

2018 - awarded the "Labour Merit" medal by the All-Russian Public Organization of Heroes, Cavaliers of State Awards and Laureates of the State Prize "Labour Valour of Russia".

From 2019 - vice-president of the Regenerative Medicine Symposium at the Oxford University.

Since 2020. - Member of the Scientific Committee of the International Congress on Aesthetic Medicine, Plastic Surgery and Anti-Aging Medicine AIME (France).

"During 25 years of professional development, I have studied and gained practical experience in more than 30 countries. It all started in a maternity hospital where being as an obstetrician-gynecologist, I was actively involved in managing patients with infertility, pregnancy and difficult deliveries. My studies and internships in European countries (France, Belgium, Italy, etc.) opened up new possibilities for me in treating patients and enabled me to network with leading professors in this field.

Over time, my patients began to ask questions about the contraindications of aesthetic procedures in the presence of certain gynecological and endocrine dysfunctions. This led me to study the field of aesthetic medicine in detail and to obtain a diploma in plastic surgery.

As a surgeon, I had in my practice many complex surgeries and also a rich experience with minimally invasive techniques. I am very selective in learning and testing techniques or products before introducing something into my practice. That is why my participation in the leading world congresses has become regular, first as a participant, later as a speaker and international expert. Over the last 7 years, I have trained more than 3,000 doctors in Europe, the Middle East, China, Russia and the CIS countries on Luxeface thread technology. This experience has convinced me that only a global approach to body health correction can give the best results and maintain them for years to come. Restoring health from inside allows you to reduce the number of aesthetic procedures and increase the duration of their results. It is called anti-aging and bioregenerative medicine, the basics of which I learned during my student years. I was lucky enough to have great teachers. Anti-aging medicine is inseparable from other medical specialties because it involves all metabolic and biochemical processes starting with the cellular level. It is generally considered an interdisciplinary medicine. This is a new level in the development of modern medicine.

I founded the International Anti-Age Expert School for physicians, where I share my experience, knowledge gleaned from all over the world and where I collaborate with leading scientists worldwide from this field. Today our community consists of more than 5,000 physicians of various specialties with whom we regularly meet at learning courses. Despite my busy schedule, I continue to work with patients every day. My best reward are my healthy and happy patients.”

To contact the specialist,
please fill out the form